Increasing the surface area of blogging

RSS is kind of an invisible technology. People call RSS dead because you can’t see it. There’s no feed, no login, no analytics. RSS feels subsurface.

Come to think of it - all the interesting bits of blogging are invisible. The discussion has moved to Twitter, or discords, or DMs. Trackbacks aren’t a thing anymore. So when you see someone blogging all you see is the blog post. The branching replies and conversations are either invisible or hard to track down.

But I believe we’re living in a golden age of RSS. Blogging is booming. My feed reader has 280 feeds in it.

How do we increase the surface area of RSS and blogging?

Here’s a lovely project visualizing a blog neighborhood. It’s not showing you all blogs (how could it!) but rather mapping a kind of specific terroir. Blogs orbiting Marginal Revolution:

Here’s a nice idea from Dave:

I like the way all the Web3 people put .eth after their names on Twitter. I am using .rss because however weird it might seem, RSS is due for a bounce-back, it's got a strong foundation, and it has a simpler mission than the crypto folk -- simply, to get news to the people.

Maybe .rss could function in the same way?

What happens if you put tomcritchlow.rss into your feed reader? I’m imagining it looks something like a bundle of individual feeds. For me that might be something like:

Mmmm. But we have a technology that nicely describes a bundle of feeds - OPML.

OPML is an outliner technology that simply links to a bunch of feeds. Here’s an example of an OPML file from Vaughn Tan. Nice.

The problem with feeds is that they render in the browser like a bunch of code. They’re not at all user friendly. That’s why Matt Webb made aboutfeeds.com to both help people understand what a feed is and to help people who provide RSS feeds to style them nicely. I use the styling on my RSS feed to make it render properly.

Turns out you can do the same thing with OPML files. Here’s an OPML file nicely styled for the browser.

Viewing a list of feeds isn’t particularly useful though. What you really want is to be able to see what Dave Winer calls the river of content. Dave’s been blogging about rivers for a long time. Here’s a good example of a river content (that is just an OPML file under the hood): bloggers.scripting.com.

My personal feed is generated using a Google Docs script because it’s a technology I know how to code. It’s creaking at this point and I need something more robust - you know using a technology more advanced than a hyperlinked spreadsheet.

Turns out Dave Winer has the technology. River5 is his tech stack using NodeJS to fetch RSS feeds (and OPML files) and present the river of content.

One click import into Replit appears to just work! Here’s an example of River5 running on my personal list of RSS feeds above: https://tomcritchlow-rss.tomcritchlow.repl.co/.

I think there’s something quietly radical about making your feed reader open by default. It increases the surface area of RSS so others can discover content more easily. It makes blogging more visible.

The nice thing about RSS and OPML is that’s a very extensible spec. The file format is flexible, you can define your own schema and fields. This might open up new kinds of publishing.

I wrote about my idea for Library.json a while back. It’s this idea that we might be able to rebuild these monolithic centralized services like Goodreads using nothing by a little RSS. Matt Webb wrote up some nice thoughts about how to implement Library.json using OPML here. And Ton Zylstra has gone further to actually publish his bookshelf using OPML.

Here’s a very rough, but working prototype showing how to parse and display someone’s library.json file.

Isn’t this delightful? None of this technology is new. But slowly we see how to maybe open up the surface area for blogging - and how we might use simple formats like RSS and OPML to create new content experiences. Stitched together with 1,000s of little Replit scripts rather than a single Goodreads service.

The nice thing about this hobby-web approach to building little scripts and apps is that you can experiment and tinker with new interfaces. For example I like how Fraidyc.at has an alternative feed presentation, not a river but something calmer. 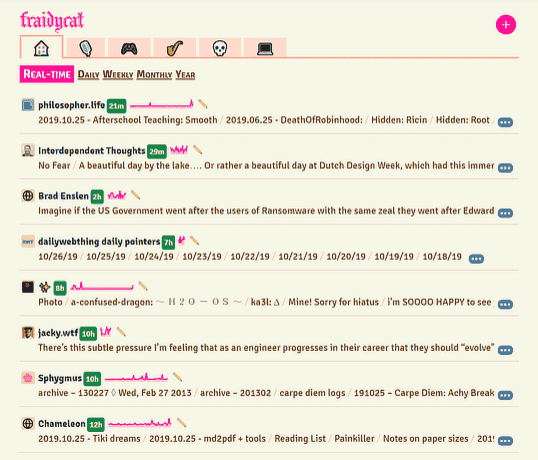 How would you design your own feed reader experience? It’s all possible. Patrick muses on this over here: personal feeds

(Can we finally get a RSS emoji or Unicode character now?) pic.twitter.com/3JAzFVEnBN

⇜ PREVIOUS
Blogging in Service of Publics
NEXT ⇝
Triple Entry Blogging
This blog is written by Tom Critchlow, an independent strategy consultant living and working in Brooklyn, NY. If you like what you read please leave a comment below in disqus or sign up for my Tinyletter.