Library JSON - A Proposal for a Decentralized Goodreads

There’s been a lot of discussion around a “better” GoodReads and at some point almost every side-project-slinger has tried their hand at building a “books website”. Myself included.

Back in 2010 I built a site called 7books - the tagline was playlists for bookworms and it looked like this: 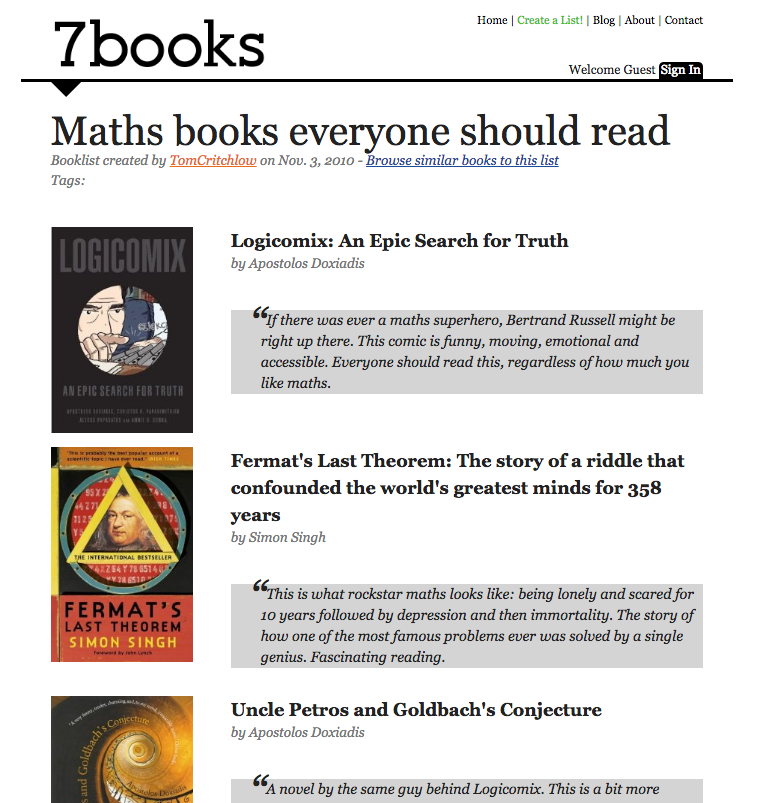 There is a large graveyard of these books sites.

But there are (at least) three fundamental problems with building a GoodReads competitor:

As far as I know there is no good reliable book index that’s open. Books come in so many different formats, re-issues, versions, languages and publishers that maintaining a canonical reference for a specific book is very tough.

It’s one of those alluring ideas that just does. not. work.

3. The only path to monetization is Amazon

Closely related to point #1 - the only (effective) way to monetize a books website is through Amazon. Any books site of meaningful size would get cut from the Amazon affiliate program in a heartbeat as it would compete directly with both Amazon and GoodReads.

There are lots of really really great indie sites that maintain structured reading lists. I’ve got a running list in my wiki: web of books. Probably my all time favorite is Mandy’s A Working Library.

Thinking through building some kind of “web of books” I realized that we could use something similar to RSS to build a kind of decentralized GoodReads powered by indie sites and an underlying easy to parse format.

I created a proof of concept by converting my own bookshelf into a JSON file https://tomcritchlow.com/library.json.

If you think of several sites publishing their bookshelf as a library.json file you can imagine a bookshelf “feed reader” that let’s you keep track of friends bookshelves something like this1: 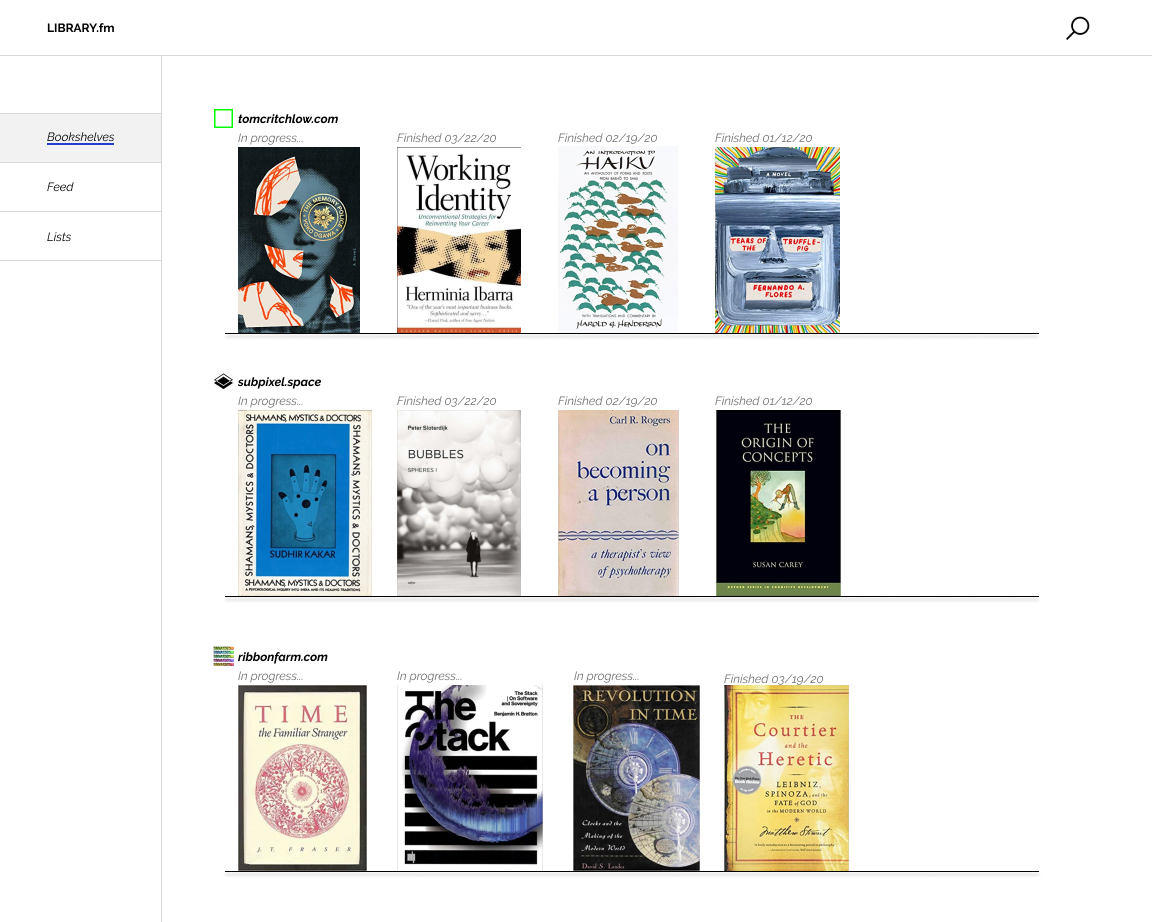 The great thing about this being an open spec is that people can choose to participate in the centralized GoodReads-esque hub or… not. In fact people can hack on top of it in many ways - extending, modifying and so on.

In particular it would be very easy for a small group of people to form a book club and host a summary view of a handful of library.json files completely independently of any open aggregator.

V0.1 of a library.json spec

So this brings me to my “spec”. Let’s imagine a library.json file that roughly looks like this:

I created some dummy example files in this gist:

So where to next? Three obvious things:

If you are interested in building something in this space and/or maintain a page that’s part of the “web of books” I’d love to hear from you on the above proposal.

Update #1 - Ravern Koh has built a working proof of concept parser! This is lovely and shows the instant power in a kind of open remixable format:

Have created a quick client for the libary.json files at https://t.co/nAeYTQhM4Y!

For example - here’s my bookshelf displayed on Ravern’s tool. How cool is that! The ability to easily and quickly hack on top of this is super fun. Thanks Ravern!

Update #2 - Ravern also had the great suggestion to build the list of people (urls) you follow into the spec… I think that’s a pretty great idea that I will loop back in:

This is a great idea.

This still requires some kind of centralised listing of library files though. What if instead we added a "following" section where you own library contains links to the libraries of others?

Clients can then build "webs" starting from a seed file

Update #3 - Matt has posted a really thoughtful reply proposing building this all as an extension of RSS: Re Tom Critchlow’s proposal for a decentralised Goodreads-like system, how about using RSS?.

Having built my own RSS feed reader already I’m very wary of RSS - it’s battle tested yes but also just one massive clusterf&%$. Parsing and understanding RSS is much harder than JSON (imho!). But - Matt raises some good points and I do like the OPML version of aggregating bookfeeds… Lots of exisiting infrastructure and ideas there… Thanks Matt - plenty to chew on here.

Update #4 - Via twitter I found Tom’s bookshelf and his goodreads CSV to yaml converter!! I tagged him and he posted a lovely reply. I don’t think he saw Matt’s reply yet but he echoed the idea of leveraging Atom/RSS for this. Hmm. That said I do love this quote which strikes to the heart of why I like json here:

That said, the thing that kills the indieweb is too much enthusiasm for specs, too few parsing implementations, and, ironically, too much focus on the ‘indie’ (building complicated self-hosted everything-machines) and not enough on the ‘web’ (noticing if anyone’s using any of the things you built). So if there’s a killer implementation and good content at the start, then momentum would potentially just carry you through.

Update #5 - This thread from Cory Doctorow:

Update #6 - Gregor posted some nice thoughts. In particular I’m curious about this JSON file. Not sure where it comes from but looks quite a lot like my library.json file! More exploration needed….

Update #7 - Phil posted some great thoughts with a strong book-flex!

Having spent some time writing code to track the past 22-40 years of my reading (22 consistenly, 40 with gaps) I thought I’d share a few things I’ve done or thought about, in terms of the data

! Oh my. Thanks Phil - great insights.

Update #8 - Ton Zijlstra has posted up some experimentation with an OPML file implementation! Lovely. Lots to explore here.

⇜ PREVIOUS
After Peacetime
NEXT ⇝
TiddlyBlink on Glitch
This blog is written by Tom Critchlow, an independent strategy consultant living and working in Brooklyn, NY. If you like what you read please leave a comment below in disqus or sign up for my Tinyletter.