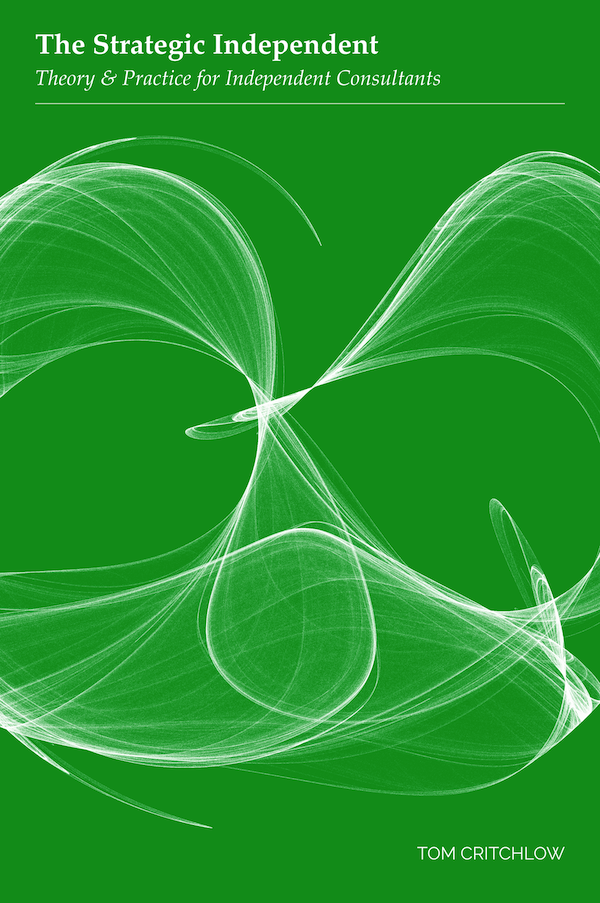 Why write a book about independent consulting?

Every independent consultant and freelancer takes a unique path. There's no blueprint to follow. But some of the challenges are shared: how to find clients? how to create your own identity? how to make a sustainable life out of being independent?

I've been an independent consultant for almost 7 years (more about me) and I'm writing this book in public, free online. It's filled with ideas and concepts that helped me, and might help you too.

Why (their) culture eats (your) strategy for breakfast

You might think that being a consultant is easy. Clients hire you to help change their company in some way. You make some recommendations and provide some insights and then…

Why is that? Well, we think consulting is:

At best this is too simple, at worst it’s flat out wrong. The problem is just below the surface - you’re hired to change their company in a way they’ve so far been unable to change. That simple addition starts to help us understand the complexity and challenges of “consulting” or “strategy”.

Every company has a grain

When you’re hired to do a job you have to understand the central question:

Why have they been unable to make this change on their own?

Every company has a deep rooted culture. Some talk about it explicitly, some paint it on their walls, some just breathe it everyday. But every company has a culture. And that culture comes from the people - the messy organic interactions between founders, executives, workers, passionate employees, internal writing, internal talks, external press coverage and so much more.

So as you think about putting together a strategy and a set of recommendations for a client you have to think clearly about whether what you’re looking to do cuts with the grain or against the grain of the organization.

Example: I recall when I was working with Fundera a few years back and was helping them think through some content strategy. I pitched them on several concepts and themes to help elevate their content above just SEO-driven headlines. As an organization they were already primed to increase content quality and the founder Jared understood the value of content deeply so we almost instantly went from concept to details. This is a clear sign that you’re going with the grain - when you instantly get into logistics and execution. Fun fact, their series “the economics of…” that I recommended is still running today!

Going against the grain is hard, messy, slow and can cause friction.

Example: I worked with a B2B saas client last year who wanted to re-balance their organization from being too sales-driven to being more marketing driven. The problem? Sales ran the show. Here, even though they were explicitly seeking help there were many organizational and cultural blockers to enable marketing to be a first class citizen within the company rather than just playing support to sales. Driving change here was messy and slow and it was increasingly obvious that what was needed was more than simply hiring a new VP of marketing.

But how do we understand which way the grain goes? How do you understand culture as a consultant?

Sometimes I wish I could be an organizational anthropologist for a living. The undocumented everyday lives of workers within systems (and how technology plays a role) is fascinating and nuanced. There’s no real blueprint to follow here. But here are some of the ways that I’ve found helpful to quickly get to the heart of what an organization’s culture is:

You can (and should) go against the grain of the organization. That’s where the big important work is done. I think about it as consulting fast and slow (inspired by the book thinking fast and slow).

Fast consulting is the aforementioned projects, ideas and change that runs with the grain where your goal is to clarify, articulate and execute.

Slow consulting is the work that runs against the grain. I think about it a lot like running a campaign; you have to change mental models and belief systems at scale.

Sometimes you need to start grassroots and build momentum from an ever increasing number of people, sometimes it’s a focused drip drip for key execs to get them to change their mind. Either way, the key in my mind is to build an ever-increasing momentum for the direction you want to take.

Some ways you might campaign for change within an organization:

In addition, there’s a secret weapon I don’t see talked about much: internal blogging. Yes, I harp on a lot about blogging but seriously, serialized, shareable content is a highly effective tool for campaigning for change and helping people to see things from your point of view:

If you only focus on one thing here though - hone in on the idea that it has to be shareable and easy to circulate. That could simply be with a google doc that has a big written “please distribute freely” label on it and access open to all within the company.

When I was at Google (pre-slack!) we used Google+ as an internal social network experience and that was effective at bubbling up disparate voices who were “blogging” internally. As an example of what this looked like this was a great piece that made it outside the walls: Steve Yegge’s platform rant.

Ah. There’s one more piece to this puzzle. I’ve talked a lot about the organization’s grain. This was a concept I fully realized and started to deliberately address about a year and a half ago. But only more recently have I stumbled across the uncomfortable though obvious follow up: the consultant has a grain too.

Let’s reframe that positioning of why consulting is hard - you’re hired to change their company in a way they’ve so far been unable to change and you will attempt to do this in ways you’re comfortable with.

It’s important to realize that businesses come in so many more shapes and sizes than you read about in the tech press. And you’ll have some preconceived notions of how a business should operate, some of which may or may not work or be appropriate for a given client.

In short - while you can work against the grain within an organization up to a point, there is definitely a limit to the amount of friction you can generate. Too much friction and things will get set on fire. Projects, teams, people, ideas, budgets.

So when you’re considering change within an organization you have to understand your own bias and take a long hard look at which of your usual ideas and often-repeated mantras actually apply to this client, and which are pushing too far against the grain. And, importantly, which of your go-to ideas are explicitly with the grain of the organization.

Because without some kind of forward motion you’re not going to be able to stick around long enough to get the bigger change done.

Hopefully this piece is relevant both for external consultants and for internal change agents. If you found this interesting here’s some further reads about the consulting world that made me think recently:

The management myth - a great rallying cry for the need for humanities and human thinking and some great context on where management consulting comes from in the first place.

Strategy as an unfolding network of associations (PDF) - kind of dense but fascinating case study of evaluating strategy within the context of culture:

The evidence from the case suggests that the concept of strategy can be reappraised. From strategy as a static set of choices made at a specific point in time to strategy as an unfolding network of people, shared experiences and artefacts that is constantly being remade.

Of strategies, deliberate and emergent - Thanks to Thomas Hogenhaven for pointing me in the direction of this one:

Since strategy has almost inevitably been conceived in terms of what the leaders of an organization ‘plan’ to do in the future, strategy formation has, not surprisingly, tended to be treated as an analytic process for establishing long-range goals and action plans for an organization; that is, as one of formulation followed by implementation. As important as this emphasis may be, we mould argue that it is seriously limited, that the process needs to be viewed from a wider perspective so that the variety of ways in which strategies actually take shape can be considered. For over 10 years now, we have been researching the process of strategy formation based on the definition of strategy as ‘a pattern in a stream of decisions’

Small groups and consultancy - by the ever brilliant Matt Webb:

I don’t think strategy can be outsourced, I think it has to emerge from a company’s nature. So when strategy evolves, there has to be organisational change. When an organisation looks outside itself (for answers that should be derived from strategy) that says to me that it’s not thinking straight, that the organisation isn’t put together quite right yet. An organisation has these informal components, and cross-team small group meetings feel like a good way to weave them in.

The art of sharing - Jan Chipchase is a master at this and I can’t wait to read the full handbook but this excerpt is especially relevant for the sharing / campaign thinking I mention above.

Consultancy, Creativity and Cooking with Sunday Dinner - from the great Lindsey Slaby thinking about new ways of getting creative projects staffed, funded, connected and thought about. I love the strong emphasis on people. They are the capital at work here!

Venkatesh Rao on Q lab - Venkatesh’s new slack only! consulting project. Given my advocacy to getting into clients slack groups you can see why this resonated with me.

The Fieldguide to Independent Consulting - ok, I’m gonna sneak one of my own links in here but if you enjoyed this post you should read this little thought-starter around independent consulting.

The Web’s Grain - last but by no means least this excellent essay from Frank Chimero is where I stole the title of this post. It’s a beautiful meditation, not on consulting but just on the flow of different mediums. Highly recommended reading.