The Importance of Launching

This is the story of how a weekend project and 276 lines of Python got me a job at Google. But it’s also a lesson I often tell - that side projects should be art or poetry. To be useful for your life they don’t need to be businesses.

And - in the networked world, launched projects are currency.

Let me tell you a story first.

One rainy day in Seattle in 2011 I was looking out the window at the grey rain and searching for interestingness. Spotify hadn’t yet launched in the US but it was looking increasingly likely that it would launch any day.

Having recently taught myself Python to build a books website, stitching APIs together was top of mind and I came up with the simple idea of aggregating the top tweeted Spotify albums every day. 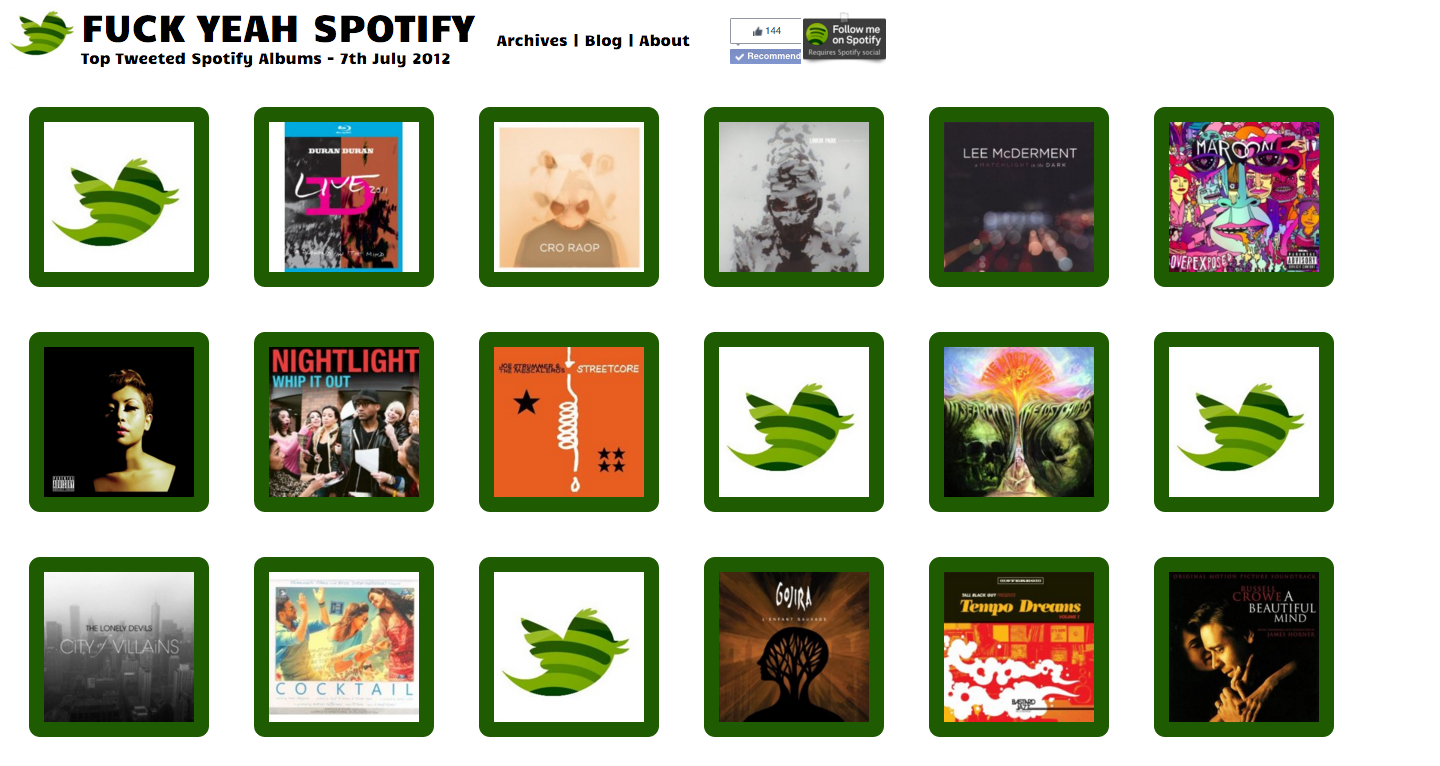 I didn’t then, and I don’t now, know how to code Python very well. Perhaps because of that, or because of the glitches in the Topsy data it never actually returned the top tweeted albums. Instead it just collected some albums people had been tweeting about that day. Because of it’s broken-ness I actually came to love it more. (I wrote about this a little in random acts of algorithms)

Act 2: The Music Entrepreneur Applies for a Job at Google

When I was interviewing for a job at Google in 2012 on the resume I wrote, at the bottom of the second page under “other skills” I wrote this:

At the end of 2010 I started teaching myself how to code Python and have developed various applications on Google’s Appengine platform including www.7bks.com & fyspotify.appspot.com

When I included this I was trying to demonstrate that I could code a little, I was trying to show a breadth of skills and suggest that I was more interesting than your average marketing geek. Then, to my great surprise I proceeded to get asked in all 7 interviews about “my music startup” or “what made me a successful music entrepreneur”.

Something had gone wrong I thought - there’s been some crossed wires. Each time I’d be very anxious and keen to downplay the success, technical merit or interestingness of Fuck Yeah Spotify. After all, this was Google and a weekend project in Python was surely nothing worth talking about?

I got the job, abandoned the site and let it fall into disrepair. End of story…?

The Thing Is, Even at Google, Most People Haven’t Launched Something on the Web

Over the years I’ve thought about this encounter a lot. Probably too much. Would I have gotten the job at Google without it? Probably.

But one thing I do know - from experience both inside Google and from running a consulting practice where I have been involved in interviewing and hiring a wide range of people. The thing I know is this:

It’s a massive differentiator to have launched something. To have had an idea, and put it into the world.

Even at Google I realized - most people I worked with had never actually put their own ideas out into the world. Everything they had worked on was a work project or a byproduct of their job.

When I’m running interviews I’ll always ask “name something that you’ve done that was 100% you - something you had the idea for and then made, doesn’t matter how big or small”. You’d be surprised how many people pause at this question and struggle to think of an answer. Most people in fact will answer this question by talking about a project that they were a part of.

I’ll say it again - a shockingly small number of people have built their own thing on the internet.

Projects are currency in a networked world

I think the commonly accepted wisdom around careers, work, skills and so on is wrong. We’re still coming to terms with the networked world we live in.

But it’s becoming increasingly obvious that projects - launched, defined, things - are currency. They project who you are, how you think. They connect the dots between influence, skills, interests, ideas, people and cultures. But most of all they demonstrate output.

A byproduct of the networked age is the bullshit industrial complex - where talking about ideas is more common than the ideas themselves. Where the antidote to this is just to launch something. To build and make things rather than reposting others work.

Get out of your feed. Make your own feed. Put something new out there. Launch something. Don’t worry about the form or function. A newsletter. A meetup. A zine. A self published book. A daily tumblr. An app. A t shirt collection.

Put something out into the world that is yours. That allows you to demonstrate what you’re capable of. Keep it weird. Keep it yours.

And if you don’t, someone else will.

A Note on The Privilege of Side Projects

I think it’s worth noting that there’s a certain luxury of time that affords side projects that comes wrapped up with privilege. Oh, sure, just take some weekends and learn Python and build something. Some people use their weekends to work second jobs not launch side projects.

That’s why I’m always keen to stress how small these ideas can be. A tinyletter newsletter is enough! You don’t need to be technical or devote a ton of time to it. Just find something you’re interested in and carve out a simple, tiny flag on a little patch of sand that says “I made that”.

⇜ PREVIOUS
Some Interesting Agencies
NEXT ⇝
Some Interesting Media Strategy Jobs
This blog is written by Tom Critchlow, an independent strategy consultant living and working in Brooklyn, NY. If you like what you read please leave a comment below in disqus or sign up for my Tinyletter.