Predicting A Global Economic Crash in 2025

Before we dive into my theory of a world wide global economic crash in 2025 let’s first do a little background and prep work.

Carlotta Perez is researcher, lecturer and consultant on social and economic impact of technological change. Her book is available on Amazon: Technological Revolutions and Financial Capital: The Dynamics of Bubbles and Golden Ages

I was introduced to Carlotta by a friend Miles Grimshaw who let me know about Carlotta being a strong influencer for Fred Wilson and USV. See more on Fred’s post about lineage.

The cycle of technological revolutions

Carlotta talks about the cycle of new technological revolutions as follows.

First comes the rapid growth as new technological infrastructure is put in place. This phase is funded by financial capital derived from speculation. This phase is called the Installation Period.

This frenzy ultimately leads to a crash as the bubble bursts.

Then starts the real growth and “golden age” as the infrastructure built in the installation period becomes cheaper, more accessible and more universal. This phase is funded by production capital derived from profits and is called the Deployment Period.

This diagram sums up the installation and deployment periods well: 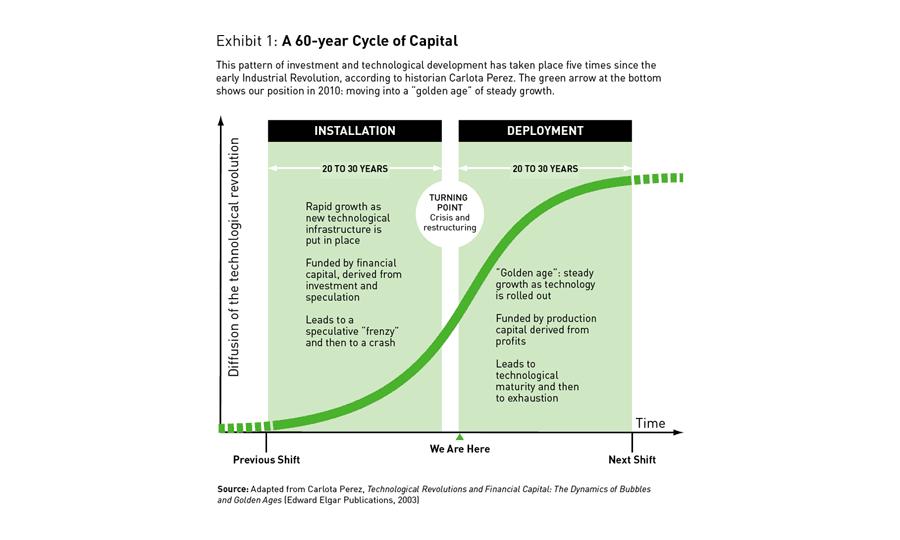 Carlotta lays out the five major technological revolutions as outlined in this diagram: 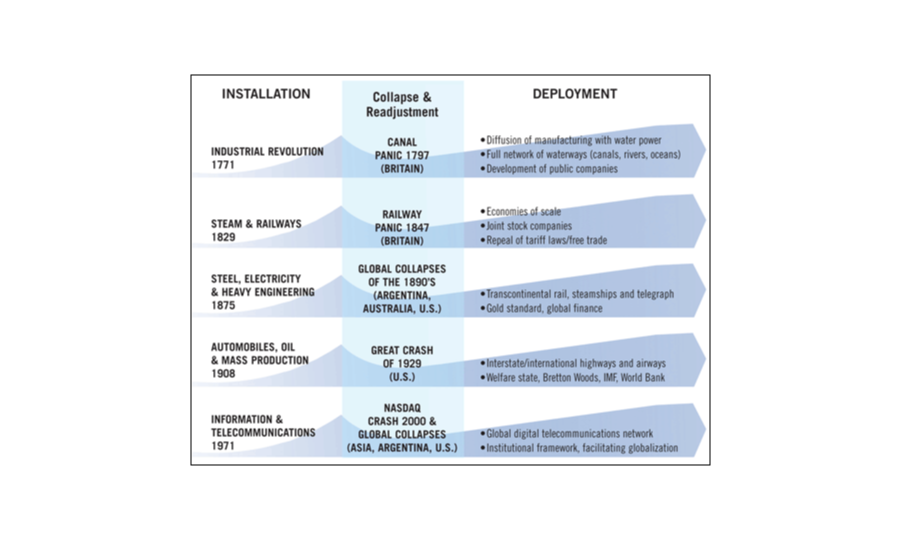 While we’re living in the “golden age” of the current information revolution it’s never too soon to start speculating on what the 6th major technological disruption might be and how it might play out. What follows is purely conjecture and an exercise in thinking critically. I welcome feedback, disagreement, discussion and analysis.

AI & Robotics as the 6th revolution

We’re right at the beginning of the installation period for AI & robotics. I summarized a few of the key events in the tech space that hopefully give you a flavor of how seriously this is being taken: But where does this trend lead? What happens next? Here’s a rough timeline I dreamed up: 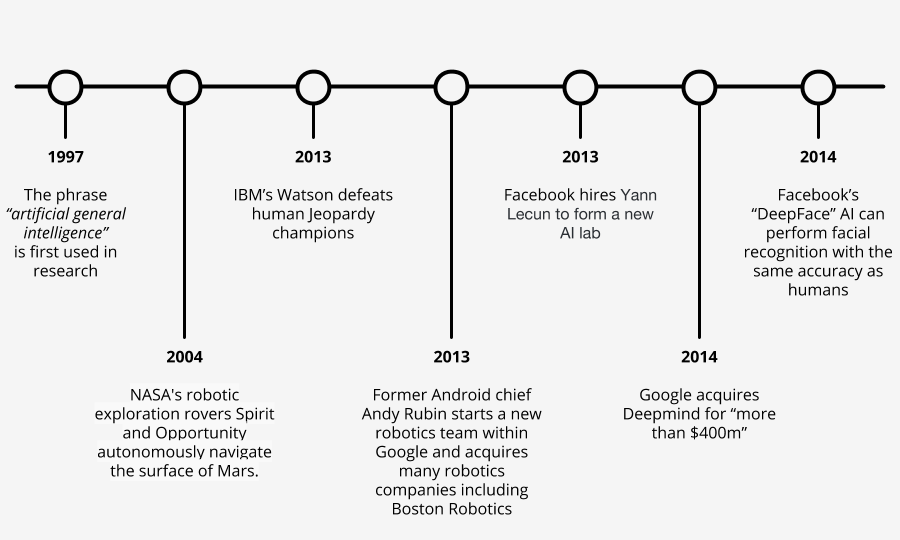 2020 - 2025: Installation of robots in both the home and industry ramps up very quickly. A smart assistant in every pocket. A roomba in every house. A robot arm in every factory. Our jobs start being replaced by robots and algorithms.

2025 - 2030: The global economy crashes. Hard. Youth unemployment has been rising steadily for the last decade and reaches a tipping point sparking a global meltdown. The global job market shrinks to an unsustainable point.

2030 - 2040: Global prosperity and an overhaul of the economic system. There aren’t enough jobs left for all the people so new economic paradigm is born - global consumerism is essentially killed off, the idea of working for a living dies and we see a much more sustainable future driven by different kinds of value creation for society and ideas like universal basic income become mainstream.

Isn’t this just the singularity?

Are we seeing a glimmer in the eye of the global consciousness with the Google bus protests? Do these protests and others like them speak to a growing dissatisfaction with the incumbents?

And importantly, how might we soften the impact of the next boom/bust revolution? Perhaps by building economics early that model the next era - i.e. universal basic income, value creation beyond “hours worked”, distributed economies and cultivating human skills.

Obviously I’ve just made all of that up - so there’s clearly alternatives out there. The whole point about these revolutions is that no one sees them coming… So what else might there be? Here’s a few ideas:

I’d love to chat with you about your ideas. Disagree? Have interesting data to share? Drop me a note and let me know: [email protected]

⇜ PREVIOUS
Let Me Know How I Can Help
NEXT ⇝
Random Acts of Algorithms
This blog is written by Tom Critchlow, an independent strategy consultant living and working in Brooklyn, NY. If you like what you read please leave a comment below in disqus or sign up for my Tinyletter.