This is post 4 in the networked communities blogchain with Brendan Schlagel. To recap briefly:

We’ve talked a lot about spaces. But what kind of spaces are we talking about?

In my post building a digital garden I talk about the idea of streams, campfires and gardens as different kinds of digital spaces:

Of course, no analogy is perfect and the uses of each platform vary wildly and overlap. But broadly speaking the Campfires analogy feels most at threat (perhaps?). The idea of spaces to actually hang out online, not fully public like twitter but faster than blogs?

I think this might be one reason why algorithmic feeds betray us - they destroy the notion that we’re in the feed together and instead make us together alone.

Instead from the perspective of the platforms (“seeing like a platform”) the “right” behavior is to create private group chat threads (e.g. whatsapp groups). But these are private, not semi-public like sidewalk spaces need to be.

Of course this idea isn’t new:

a lot of real-time nuance, dialogue, and clarification are lost in these monster threads

There is a large graveyard of websites, apps, startups and ideas that have tried to crack this digital sidewalk / digital campfire space. Perhaps they’re forever doomed to be built, abandoned and reinvented over and over again. Maybe that’s ok.

After all - coffee shops and local sidewalk spaces shift and change all the time.

There’s a temporal problem here though - streams are “always on” and blogs/wikis are basically completely async.

What if there’s a new way - by windowing our attention to time windows to create attention, draw people together and form community. This is the “campfire” section of the analogy but with a deliberate attention to being present at the same time - something blogging really lacks today.

This idea is explored in depth by Cody Brown in his post Conductor Social Networks If you don’t have a Medium account remember they’re always free to read coming in via Twitter :

There is a human scale feeling to the space that is so completely lost when I sign in to Twitter each morning. It’s like the difference between entering a concert hall and waking up in The Tower of Babel.

Alt Shift X uses fairly run of the mill broadcasting software (an app popular with Twitch streamers) but I think he’s tapping into something big that feels like an emerging category on the rise. For lack of a better term, I call this category, “conductor social networks.” A musical conductor’s job is to artfully pull music from an orchestra, and in this case, a conductor does the same but for information, conversation, and/or whatever the conductor desires. Conductor social networks have two core features:

These conductor networks and communal hang spaces are fascinating to me. While we’re all busily engaged in seemingly real-time feeds there’s very little communal real-time hanging out online anymore.

And there’s a graveyard of these “real-time” hang spaces.

Well there’s a new kid on the block: 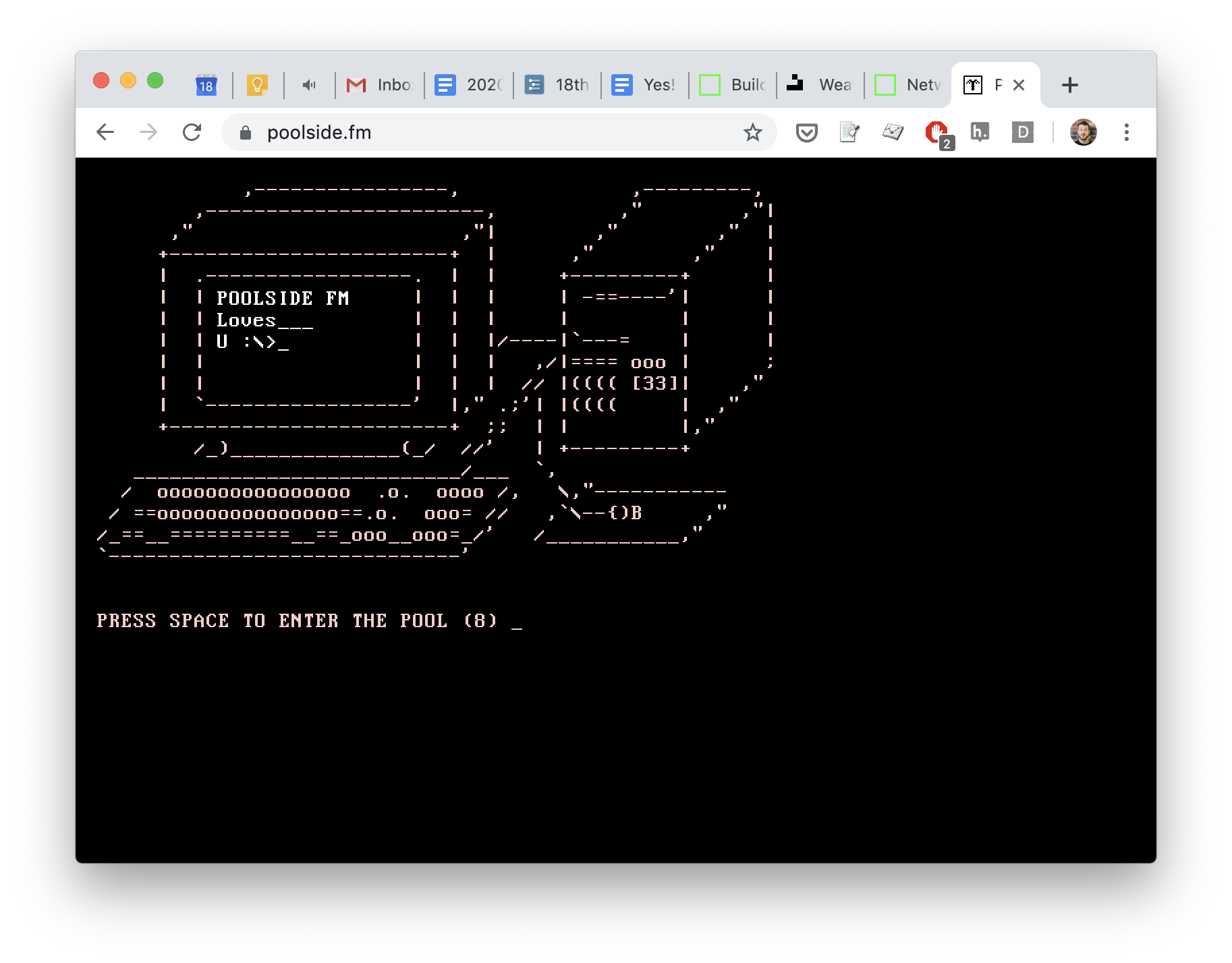 Anyone else enjoying poolparty.fm right now? It’s a fun

This idea of concurrency is powerful:

This is what I assume is the driver behind so many people thinking about intentional digital third places. Carving out a pool that they can control more with a sense of discovery that isn’t overbearing… yet can accommodate the flexibility of asynchronosity (that’s the word deal with it) that we simply expect. Waiting for the signal that the water is fine.

Music is the glue

Remember the campfire analogy? There’s a reason music is a key feature of the campfire chat. To keep people hanging around in real-time you need one of two things. Focused attention or ambient attention. Focused attention is something like a specific conversation or debate, perhaps a performance of some sort. Something that requires you to be there.

Ambient attention is something like music - it allows for drops in the conversation and focused attention so that you can stick around comfortably in the same space but without words. Just hanging.

I’ve been following this one electronic music radio station since 2009. And there’s a reason this community has been so sticky - despite

But, what if there’s another way to keep a community small - not by limited members but by limiting the time window?

There is a human scale feeling to the space that is so completely lost when I sign in to Twitter each morning. It’s like the difference between entering a concert hall and waking up in The Tower of Babel.

While some twitter threads become immortalized and evergreen mostly the distinction between a twitter thread and a blog post is that it’s real-time in the feed.

This is an important distinction.

That said - maybe there’s light at the end of the tunnel. As software gets cheaper and “easier” what if we can build our own little sidewalk spaces? Socket.io makes this trivially easy. There’s an example on Glitch that shows how to build a real-time chat room using socket.io.

I forked that to make my own chatroom. If you’re reading this post “in real time” I’ll be hanging out here - come say hi:

Or, if you prefer to stay on the page

Making my own POOLPARTY:

On enter check for music, video

Gossip’s cafe John Palmer with his spatial chat room at the end of his post https://darkblueheaven.com/spatialsoftware

This blog is written by Tom Critchlow, an independent strategy consultant living and working in Brooklyn, NY. If you like what you read please leave a comment below in disqus or sign up for my Tinyletter.